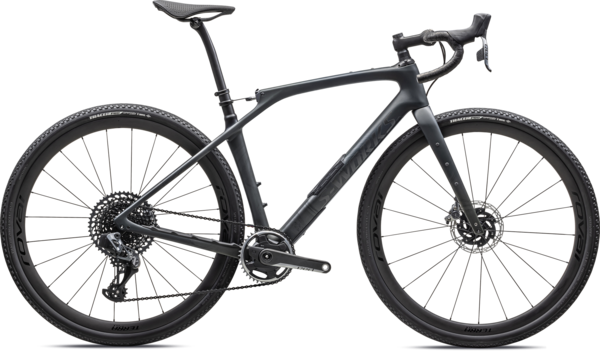 With Future Shock suspension front and rear, the new Diverge STR delivers compliance without compromise. By suspending the rider-instead of the bike-Future Shock technology increases control and efficiency while decreasing fatigue, so you'll be riding farther and faster over chunkier terrain than you believed possible. And the Diverge STR does this without the weight, sluggish pedal response, and inefficiency of other suspension systems. The S-Works Diverge STR starts with our FACT 11r carbon frameset with front and rear Future Shock suspension. It's built with SRAM's Red eTap AXS Eagle groupset for fast, efficient shifting with a 10-50 cassette to ensure you have the gearing to tackle any ride and a Quarq power meter helps you to dose your effort to perfection. The bike rolls on the new, lighter Roval Terra CLX II wheels with 42mm Tracer Pro tires. Terra carbon bars, an S-Works carbon seatpost, and S-Works Power with Mirror saddle complete the package making the Diverge STR the most capable Diverge ever.

- By suspending the rider with damped, tunable travel-20mm front/30mm rear-Future Shock Technology absorbs bump forces to boost your control and capability while retaining the efficiency and responsiveness of a rigid frame. Because as far as power transfer goes, it is a rigid frame. Power to the pedals makes the bike jump like a scared cat. You're efficient, you're comfortable, you're in control. Your bike is light, nimble, and responsive.
- The new Diverge doesn't just have gorgeous lines, it has perfect curves too. Future Shock Rear puts 30mm of rear travel in the ideal path to smooth out rough road. Its hydraulic damping controls travel to eliminate "bobbing" under power and ensure big hits never catapult you from the saddle, all without compromising fit or pedaling efficiency.
- Born from decades of innovation and our Smoother is Faster philosophy, Future Shock was created to develop bikes that win on cobblestones, but it's found its purest expression on gravel. It's 20mm of adjustable, damped front travel that keeps you in control and on target, all while protecting your hands, arms, and shoulders from the battering.
- More capability means more confidence, more confidence means more rides, more rides mean more fun, and it all starts at the contact patch. Nothing unlocks capability like tire clearance, and we're feeling generous. 47mm on a 700c wheel and 2.1" on 650B. Diverge STR is the most capable gravel bike we've ever made, so it's the most fun. We did the math.
- The S-Works Diverge STR FACT 11r carbon frame is more compliant than any drop bar bike we have ever made yet adds just 100 grams compared to the S-Works Diverge frame. Never have so few grams added so much capability. Climb it, race it, or load it down with bags and gear for the long haul-Diverge STR does it all faster and smoother without any excess baggage.

* Subject to change without notice.